In this post we highlight one of the many items in Special Collections on the history of lawyering in America, this time in nineteenth-century Ohio. In the 1980s, the UVA Law Library purchased at auction a lawyer’s docket book with case entries from 1823 to 1886 and a tin law office sign, both attributed to Cadiz, Ohio lawyer Walter G. Shotwell. Docket entries in this book typically list the case name, case actions, and receipts of payments. All entries have been indexed and offer a detailed look into the practice of law in the nineteenth century. Cataloged as Walter Shotwell’s ever since its acquisition, much of the docket book actually predates Shotwell’s birth in 1856. Some recent digging revealed that the book likely belonged to Shotwell’s father, Cadiz lawyer Stuart B. Shotwell, and to Cadiz lawyer Chauncey Dewey before that. 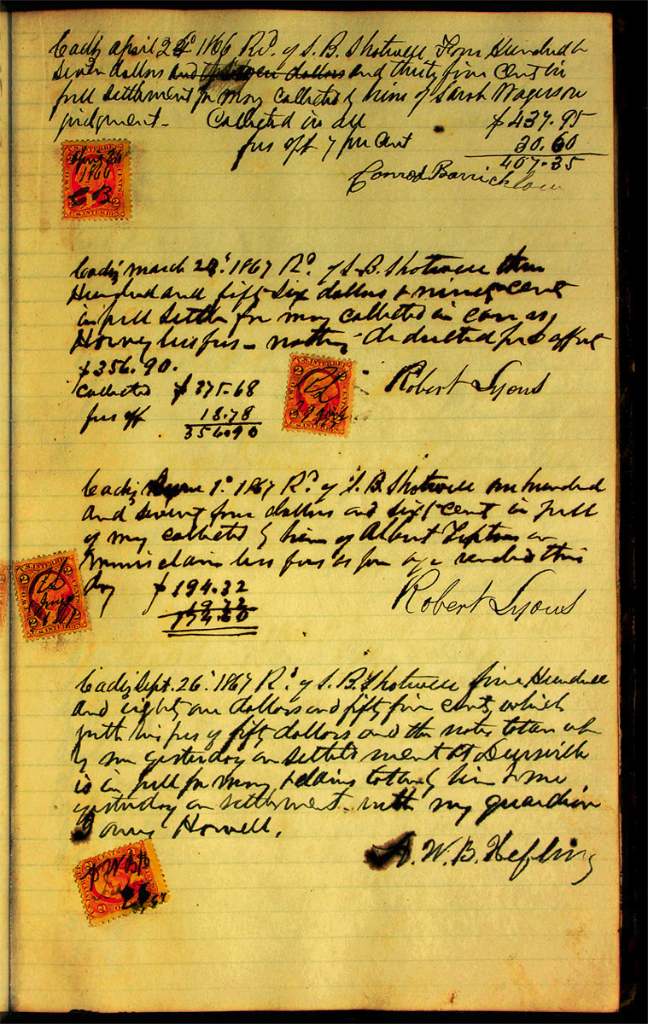 Just about the time the docket book begins in 1823, newly-minted Ohio lawyer Chauncey Dewey (b. 1796) formed a partnership with Steubenville lawyer and future Ohio Senator Benjamin Tappan under the firm of Tappan & Dewey. We can’t confirm that the docket book belonged to Dewey, but entries in this period make occasional reference to collaboration with Tappan on various cases. In 1836, this first section of docket entries stops. That same year, Dewey formed a new partnership in Cadiz with Edwin M. Stanton, future Secretary of War under presidents Abraham Lincoln and Andrew Johnson.[1]

When the Dewey-Stanton partnership dissolved in 1842, Dewey quickly formed a new partnership in Cadiz with Stuart B. Shotwell (b. 1819) under the firm Dewey & Shotwell, and in this year the docket book picks up again. Dewey retired from the practice in 1849 and became a leader in Cadiz’s growing banking industry while Shotwell carried on the law business under his own name.[2] An advertisement Shotwell placed in the Cadiz Sentinel in November 1850 announced that he “continues to practice in Harrison and adjoining counties” in Ohio as an “attorney at law and solicitor in chancery.” He handled legal matters ranging from land sales to money loaning to guardianships, many of which are reflected in the docket book he kept of his cases, now at the UVA Law Library.[3]
Shotwell’s 1850 newspaper advertisement also announced that he had moved his office to Kilgore’s Corner on Market Street in Cadiz. Here, Shotwell may have installed the tin sign that accompanies the docket book and reads “Shotwell’s Law Office.” Adding mystery to this artifact is a painted-over “Wm.” that precedes “Shotwell’s.” We know little about the sign’s history, but Stuart Shotwell’s brother, William Shotwell, Jr., a lawyer in Butler County, Ohio, died in 1849, just as Stuart was setting up his new Cadiz law office.[4]
Walter G. Shotwell, printed in William T. Perry, ed., History of Carroll and Harrison Counties, Ohio (New York: The Lewis Publishing Company, 1921), 613.

Shotwell remained in business as a Cadiz lawyer until the late 1880s, where the docket book ends. His son Walter G. Shotwell trained in his law office beginning in 1878 before Walter’s admission to the Ohio bar. In 1880, Walter opened his own law office in Cadiz where this collection was likely once stored.[5]

The Shotwell collection is open for research at the UVA Law Library. Interested researchers can contact Special Collections at lawarchives@virginia.edu. We would love to hear from anyone with additional knowledge of these materials.