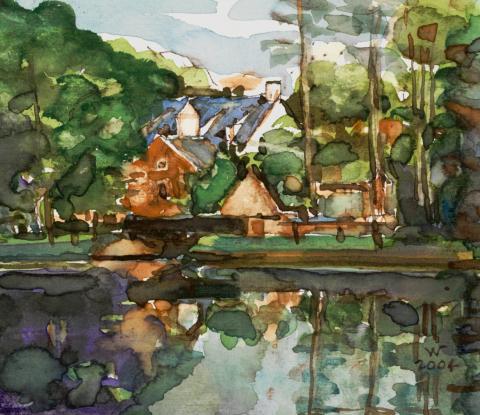 This week the Law Library opens a new art show, Places of the Piedmont, an exhibit of watercolors by Werner K. Sensbach (1923–2015). A public reception will be held Thursday, September 1, from 5 to 7 p.m. on the second floor of the Law Library.

Werner K. Sensbach was born in Mannheim, Germany in 1923. He worked throughout his life in various fields of artistic endeavor. With professional degrees from the University of Karlsruhe, Germany, and the University of North Carolina at Chapel Hill, he was an architect for firms in Germany, Switzerland, and New York. He served as city planner in Columbia, South Carolina, and Roanoke, Virginia, and as the University of Virginia Campus Architect during its intensive growth period from 1965 until 1991. Werner Sensbach was also Professor of Urban Planning in the School of Architecture. Upon his retirement in 1991, the University planted an American oak tree between the East Range and Brooks Hall in his honor. Retirement allowed him to discover the Virginia landscape through the eyes of an artist. In watercolor field sketches and al fresco oil paintings, he portrayed the landscape of the Piedmont and Blue Ridge Mountains as well as the architecture of the Grounds of the University of Virginia.

Werner Sensbach’s work flows naturally from his interest in the landscape and man-made environment of the Piedmont Region. The Grounds of the University of Virginia and the City of Charlottesville are the subject of many of his architectural paintings. In the mid-1940s, Werner Sensbach received his initial artistic instruction from painters of the Neue Sachlichkeit (New Realism) movement of the Twenties: Erich Heckel (1883 – 1970) and Karl Hubbuch (1891 – 1979) of Karlsruhe, Germany. Their style of slashing line drawings proved useful in his later career in architecture, urban design, and campus planning. After retiring from his position as University of Virginia architect and planner in 1991, Werner studied at the University of Virginia Department of Art with Richard Crozier, Phil Geiger, Dean Dass, William Bennett, Lincoln Perry & Elizabeth Schoyer.