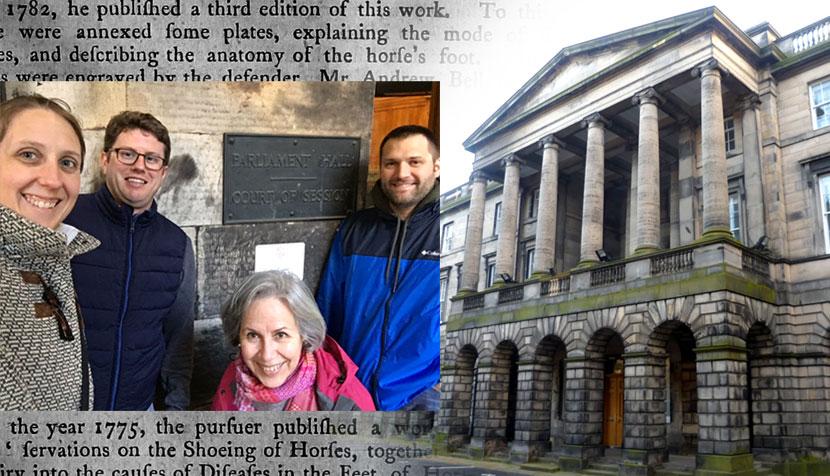 Thirty years after the University of Virginia School of Law acquired a trove of legal documents from Scotland’s Court of Session, the supreme legal court there, the Law School’s Arthur J. Morris Law Library is building a digital archive and reaching out to partners “across the pond” to open these legal history materials to scholars and the public.

When complete, the archive will provide users with access to the previously hidden histories of people living through an era of profound change.

Last week, the Special Collections team traveled to Edinburgh, Scotland, to present the digital project at the annual meeting of the Scottish Records Association and to meet with colleagues at the University of Edinburgh Library, who are pursuing a similar initiative.

The Court of Session, as Scotland’s highest civil court, hears cases dealing with divorce, real estate, bankruptcy, intellectual property, debt and a variety of other civil matters. In the mid-1980s, the Law Library purchased a collection of documents related to about 2,500 cases heard before the court between 1757 and 1834.

The University of Edinburgh Library, the National Library of Scotland, the Faculty of Advocates Library and the Signet Library hold more than 4,000 volumes of the court’s papers combined.

Unlike the handwritten manuscripts produced by English or American courts from this period, the Court of Session did its work in print. Memorials, petitions and even evidence were given to the court in this form. Today, the clear type makes the collection more accessible to researchers and easier to digitize.

Users will be able to search through a single document or the entire collection, peruse the rich data provided for each case and download documents for free.

War, revolution and the Enlightenment transformed the lives of 18th and 19nth century peoples living around the Atlantic basin. These documents illuminate the lives of Scottish merchants trading with colonial Virginia tobacco planters; provide insight into the transatlantic slave trade; show how Scottish women defend their limited legal rights; and trace conflicts between literary figures and their publishers, among other stories.

For example, the copyright dispute at the heart of Clark v. Bell (1804) opens an entry point into the early history of the Encyclopedia Britannica.

Among the sources creators Colin Macfarquhar and Andrew Bell consulted was work by James Clark, a veterinarian and King George III’s farrier in Scotland. In 1801, Clark sued Bell (Macfarquhar having since died) for copyright infringement under the Copyright Act of 1710.

Clark alleged that the two men had incorporated verbatim portions of his two treatises on equine care without his consent. After “the best and most valuable parts of them are inserted in the Encyclopaedia Britannica,” publishers refused to issue new editions of his work, Clark said. He charged that Bell and Macfarquhar had violated the Copyright Act, harming his business interests and reducing his potential income. The court agreed.

The Lords of Session (as the judges are called) sided with Clark and later affirmed judgement on appeal.

What Clark v. Bell offers is a legal window into the creation of one of the most iconic literary productions of the past three centuries. The case documents provide details on the process Bell and Macfarquhar used to assemble the Encyclopaedia’s early editions — and suggest where to look next. (The record makes it clear that Bell and Macfarquhar faced similar accusations from other authors.)

Collaborating with the Edinburgh-based coalition will allow the Law Library’s Special Collections team to continue to bring rich legal materials like these to light as we trade knowledge and expertise with our colleagues abroad.

It will also enable the two groups to reconstruct case histories in digital space, making it easier for scholars, genealogists, bibliophiles and law students to access a complete case record.

Compiled in leather-bound volumes (like similar collections in Scotland) at one point, the Law Library’s documents were removed from their bindings sometime after 1835. They rest now in archival boxes that consume 64 feet of shelf space in the Library’s Special Collections unit — as we steadily continue to digitize their contents.

The Law Library is preparing to release its first batch of documents. Look for them online soon. For more information on the project, including how you can support it, contact archives@law.virginia.edu.

(This article was first published on the University of Virginia School of Law website on November 17, 2017.)