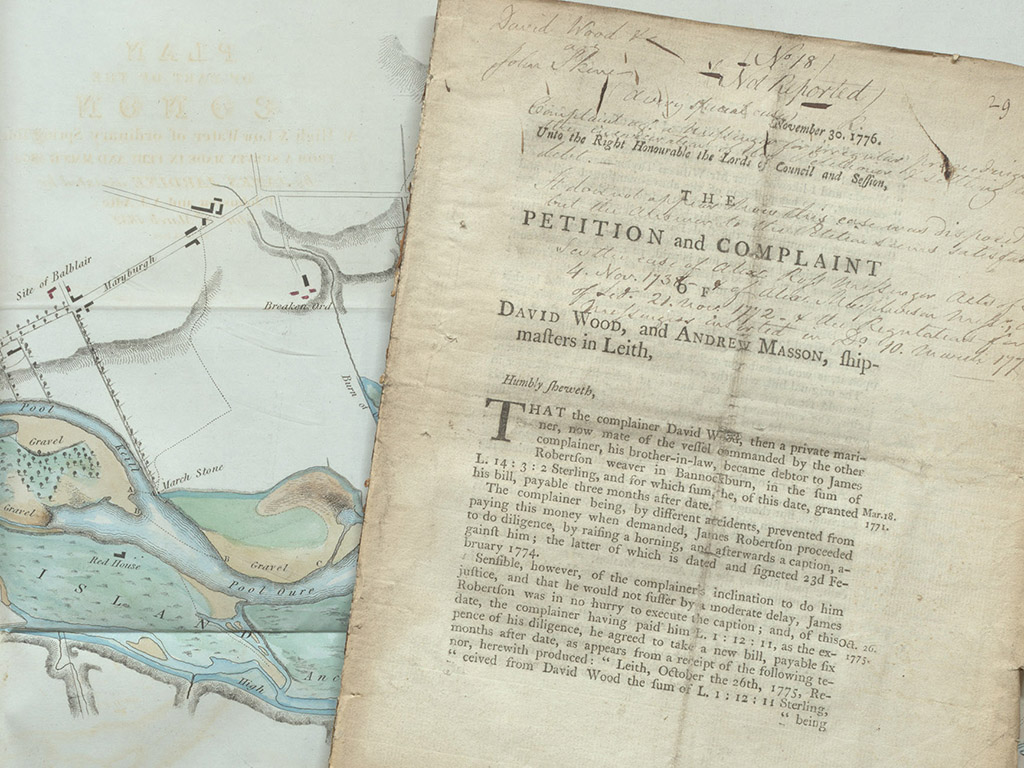 Buried deep in the stacks of Edinburgh libraries lie court records that tell stories about early America. In the Faculty of Advocates Library and The Signet Library, both just a few doors down from Scotland’s Court of Session, and in the Centre for Research Collections at the University of Edinburgh, rests evidence of Glaswegian merchants who traded for Virginia tobacco, families divided by the American Revolution, enslaved men and women who toiled on Caribbean sugar plantations, and much more. These Session Papers, the printed material submitted to Scotland’s supreme civil court as part of the litigation process, contain hidden histories of early America and the British Atlantic world.

Through a generous grant from the William Nelson Cromwell Foundation, a team of historians from Special Collections at the University of Virginia School of Law’s Arthur J. Morris Law Library will soon visit Edinburgh to begin identifying court cases involving early American litigants. Drs. Jim Ambuske, Randi Flaherty, and Loren Moulds, the co-directors of the Law Library’s Scottish Court of Session Project, will travel to Scotland’s capital to investigate these court records. While some cases appear in published law reports, most remain hidden in the bound volumes of court documents held by these historic Edinburgh libraries.

The Cromwell Foundation, which supports American legal history scholarship, has commissioned the Law Library team to survey Court of Session cases involving early America. Working closely with Edinburgh librarians, Ambuske, Flaherty, and Moulds will locate such cases and prepare a publicly available report on their findings. The report will enhance the discoverability of these cases for future scholars working on legal or early American history projects. It will also help identify groups of Session Papers for priority digitization as part of a collaboration to make these records more accessible for legal and historical research.

Finding evidence of early America in the Session Papers will illuminate the close ties between Scotland and America in the eighteenth and early nineteenth centuries. As the historian Timothy J. Shannon has recently shown in his new book, Indian Captive, Indian King: Peter Williamson in America and Britain, Session Papers can recover the lives of individuals like Williamson. In the mid-eighteenth century, the Aberdeen native claimed to have been kidnapped and sold into indentured servitude in the American colonies. While it seems clear that he was in the colonies as a young man, and perhaps later fought in the French and Indian War, his claim to have been held captive by Native Americans at one point is more suspect. Nevertheless, Williamson “played Indian” for Scottish audiences upon his return home and parlayed his alleged experiences into commercial opportunities. We know of his story in part because he sued the Magistrates of Aberdeen in the Court of Session, charging that they had been complicit in an illegal servant trade that had sent him to North America.

While in Scotland, the Law Library team will meet with collaborators at the University of Edinburgh, the Edinburgh Law School, and representatives from the Advocates and Signet libraries to advance a transatlantic partnership that is pursuing the creation of a digital archive to hold nearly 250,000 individual Session Papers. Using a combination of computer technology and human interpretation, the collaborators are exploring ways to more efficiently identify people and places within these printed documents, which will assist in the cataloging process, enable digital humanists to conduct large-scale analyses of the material, and make it easier for scholars and the public to search for historical figures and locations.

The project team is grateful to the Cromwell Foundation for its significant investment in the Scottish Court of Session Project. For more information on the Foundation and its efforts to support legal history scholarship, please visit www.cromwellfoundation.org. To learn more about Special Collections at the Arthur J. Morris Law Library, please visit archives.law.virginia.edu.