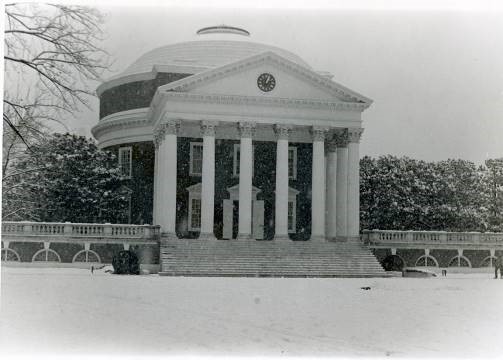 In May 2018, UVA Law Special Collections purchased a small collection of photographs of UVA in the 1970s, including one contact sheet of Libel Show images, from an eBay vendor. When the collection arrived, we discovered that the seller had included three additional boxes of UVA-related negatives and photographs. Special Collections Assistant Sara Garcia-Pretelt has completed an initial inventory of this collection, and she describes here some of her most interesting discoveries.

The UVA Law Library’s newly acquired UVA/Charlottesville Photograph and Negatives Collection is comprised of images of the University of Virginia and the greater Charlottesville area during the late 1960s through the early 1970s. Among the photographs, contact sheets, and negatives found in this collection are scenes of student life, iconic Charlottesville landmarks, and important historic events.

A long-standing UVA Law School tradition, the annual Libel show displays law students’ creativity and humor through skits and musical numbers. These photos were taken on April 18, 1975 for the production titled “A Sale of Two Cities or Salooney Tunes.” The law school student newspaper reported that the show “delighted crowds and embarrassed a few professors” (Virginia Law Weekly, 1975). Pictured below on the left is a student performing as “Charlie Blackbread” and pictured on the right is an unidentified law student actor.

The following photos were taken by various photographers during the May 1970 UVA student protests following the Kent State shootings and President Nixon’s announcement that US troops would be sent into Cambodia. A number of UVA Law students served as student marshals during these multi-day protests. Photographer Rip Payne captured scenes of the Virginia State Police preparing to address the student protests. Pictured are officers gathered outside of the Downtowner Motor Inn (later the Cavalier Inn) at Emmet and Ivy Roads and two officers with a police dog. On May 8, 1970, during a “honk for peace” student rally outside the Rotunda, the Virginia State Police enforced the 1968 Virginia riot act, charged the demonstration, and arrested 68 people. In his photograph titled “Lawn Arrest,” photographer Jim Carpenter documented police officers arresting a student on UVA grounds. Photographer John M. Atkins, Jr. captured in his photograph titled “Marshal,” a law student attempting to negotiate with a police officer about the arrest of another law student at the door of the Mayflower van, which the Virginia State Police used to transport arrestees to the Charlottesville police station. The band tied around the student’s arm signals his role as a legal marshal to keep the peace during the student protests.

Also in this collection are images of iconic UVA landmarks such as the Corner and the Lawn in the 1970s. Pictured below is University Avenue just outside of Mincer’s Pipe Shop (now known as Mincer’s) where students and professors cross over onto Grounds. Today, the Corner’s crosswalks are infamous for the students that cross with no regard for oncoming cars as they rush to classes and meetings. Nearly 50 years later, these images still capture what it is like to live and study at UVA.

As the ‘Hoos advance to the Final Four for the first time since 1984, students today are hoping for redemption for Tony Bennett’s principled and impressive team. Of relevance in this photograph collection are images of UVA men’s basketball games in the Spring of 1975, such as this photograph featuring star players Mark Iavaroni and Wally Walker playing in U-Hall.

While most of this collection showcases student daily life, it also documents more significant moments like graduation. A symbolic UVA tradition, graduation on the Lawn is the culmination of students’ hard work over the last four years. Pictured below are families gathering on the Lawn by Old Cabell Hall to support their graduating students, while the Rotunda looms in the distance.

Unlike most of our digital collections, these images are presented under the fair use doctrine or with permission from the copyright holder, not under a Creative Commons license. Researchers can review the full collection of photographs and negatives at Law Special Collections on the third floor of the UVA Law Library.

View all posts by Sara Garcia-Pretelt.