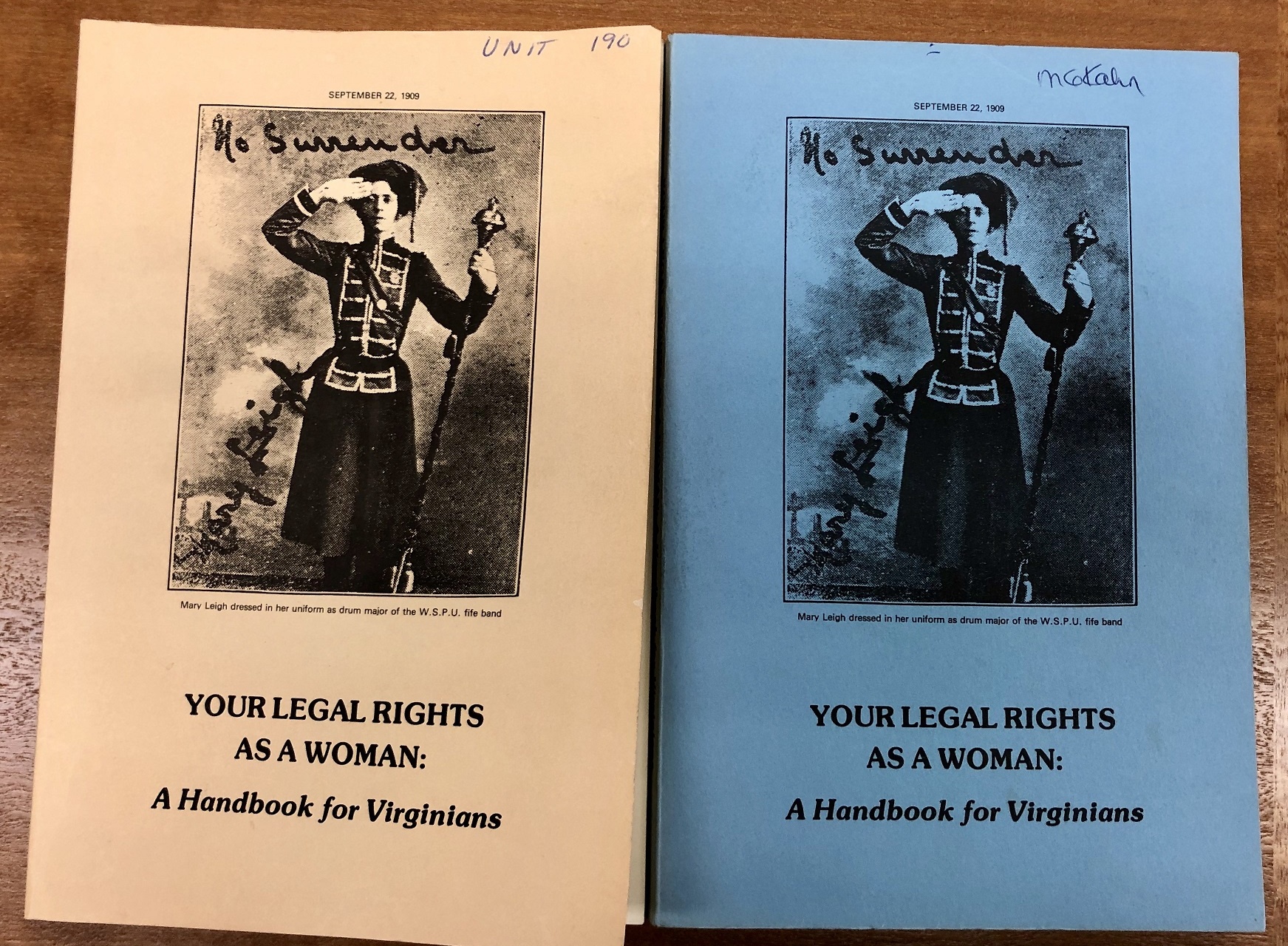 Five years after the University of Virginia Law School began offering a “Women and the Law” course, which was supervised by two male professors in 1972, the Virginia Law Women (VLW) embarked on an extraordinary project. Six members of the group—Joan Kuriansky, Susan Buckingham Reilly, Diane Pitts, Jackie Blyn, Diane Smock, and Tracy Thompson—researched and wrote a legal handbook for women in Virginia titled Your Legal Rights as a Woman: A Handbook for Virginians (1977). Modeled on a handbook created by the North Carolina Law School Women, the text was, as the introduction stated, “written by women for women who want the law to work for them…Today we have many more rights than we had even five years ago. But unless we are aware of these rights we cannot exercise them” (VL141 .Y817 1977). The handbook, funded by the Virginia Commission on the Status of Women, was written in lay terms and explained Virginia laws concerning marriage, divorce, adoption, property rights, insurance, taxes, employment, social welfare programs such as Medicare and worker’s compensation, birth control, abortion, the criminal justice system, and gay rights. It also included a section on the Equal Rights Amendment (ERA) which had been approved by Congress in 1972 and was awaiting the requisite 38 states to ratify it into law at the time. In concert with consciousness-raising movements and projects across the country in that historical moment, the text made women conscious of the rights they were entitled to and the wrongs they suffered on account of their gender.

While the Virginia Law Women distributed the handbook locally to libraries, organizations, agencies, alumni, and faculty, the Virginia Commission on the Status of Women distributed the bulk of the copies across the state. In the VLW manuscript collection here at Law Special Collections, one folder brims with requests for the handbook at the time of its publication. Dozens of women who read about the handbook in the newspaper wrote and asked for copies. Several stated that they planned on using the handbook to help them through their divorces. One high schooler even asked for the handbook as research for a paper on the ERA. The group received requests from rape crisis centers, women’s prison projects, libraries, law schools, the American Association of University Women (AAUW), the ABA, the National Organization of Women (NOW), the Women’s Law Coalition, and Legal Aid. The combination of the handbook’s popularity and the significant changes in laws applicable to women in this period resulted in revised editions in 1979 and 1984. In the second and third editions, new sections were added to reflect changing laws, such as Title VII, Title IX, establishing credit, mental health, and domestic violence. In addition to the revised editions, the VLW taught a local continuing education course on the handbook in 1980. While the handbook did not address everything (the absence of a discussion about the legal implications of American racial inequality is noticeable), it served as a much-needed resource for women across the state.

The most revised and debated section of the handbook was the section on the ERA. The VLW originally planned to openly advocate for the ERA in the first edition, but they deleted that paragraph, deciding simply to describe the amendment and its potential impact because their funder, the Commission on the Status of Women, asked them to remain “politically neutral” (VL16. L425L c.1). The second edition was delayed because the Commission asked them to remove the entire section on the ERA. The VLW objected, citing the copyright in their name and declaring the issue of the ERA “vital to the women of Virginia” (RG 209-82). The Commission eventually withdrew their request and the subsequent editions not only included a section on the ERA but a section that was longer than the original. While the ERA was not originally a partisan issue (it has appeared in the platforms of both the Republican and Democratic parties), the Commission’s anxieties about it have made me wonder whether they knew the story of the woman in the photograph on the front cover of the first and second editions. The photograph was of British suffragette Mary Leigh in her Women’s Social and Political Union (WSPU) uniform. Leigh was famous for throwing a hatchet at Prime Minister Asquith in 1912, among other militant activities.[1]

I’d like to end this post by reflecting on how these handbooks serve as a historical record of change. My own research focuses on women, politics, and property rights in eighteenth-century literature. I have spent more days than I can count poring over pamphlets about women’s legal rights, law books, and case documents from the seventeenth, eighteenth, and nineteenth centuries. I inevitably came across the word “dower” in most of them. I never expected to come across that word in all three editions of Your Legal Rights as a Woman: A Handbook for Virginians. I was shocked that dower, a widow’s right to a life estate in one-third of her husband’s real property which came into being sometime around 1310, appeared in a legal handbook for women in the late twentieth century.[2] Upon further research, I discovered that dower was not abolished in the state of Virginia until 1990. I discovered that the topic of my last blog post, the law of necessaries—an integral element of coverture—was the law in Virginia until 1983 when the state Supreme Court declared it unconstitutional under the 14th amendment.[3]  Finally, I discovered the word “coverture”—the common law doctrine that rendered husband and wife legally one person after marriage, which required the husband to act as representative for them both and which stripped the wife of many legal rights—still appears in the Virginia state code in two places. The first place is section 55-35, a statute that reflects the Married Women’s Act of 1877, which enabled women to hold and dispose of property as if they were single women and declared that the wife’s property was not liable for her husband’s debts.[4] 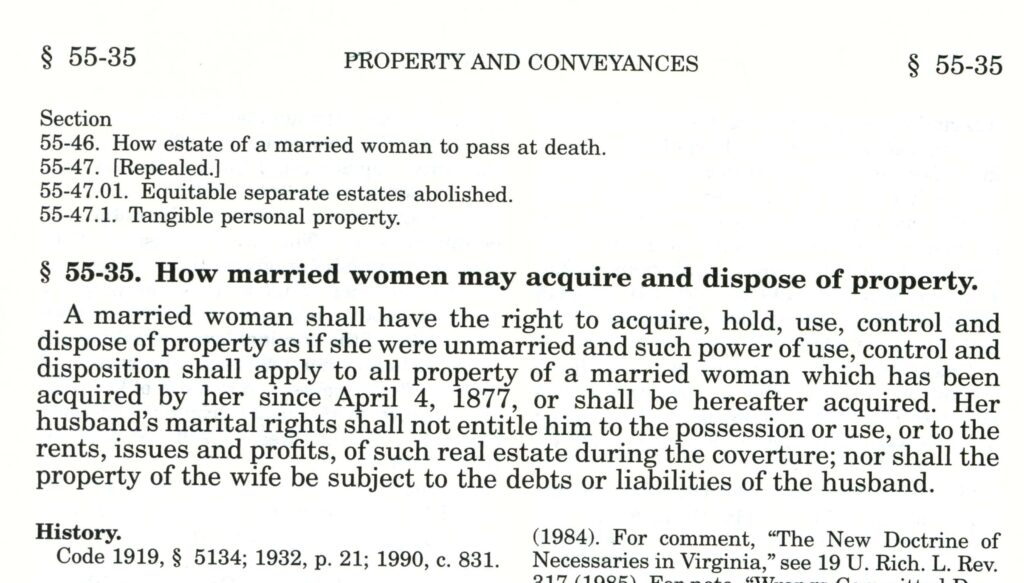 The second place is section 55-38, a statute that states the wife’s right of entry into land cannot be barred by judgments during or after her husband’s lifetime.[5] Ironically, the word “coverture” appears in statutes that recognize women as legal persons independent of their husbands. In fact, these sections are scheduled to be repealed in October 2019 and replaced by revised sections that continue to use the word “coverture.” This means that the word “coverture” has been a part of Virginia law since the colony’s founding over 400 years ago and still is to this day.[6] To me at least as a scholar, the appearance of “coverture” in the state code raises the question of whether it was ever really abolished, or if it was simply reformed and remains part of our legal framework. Even though dower and coverture might seem like antiquated legal tools that we rightly dismissed long ago in the name of equity, they recently informed, and in the case of coverture may still inform, the way women are treated under the law in Virginia. These legal relics are one of the reasons why women would still find a handbook like this one useful today.