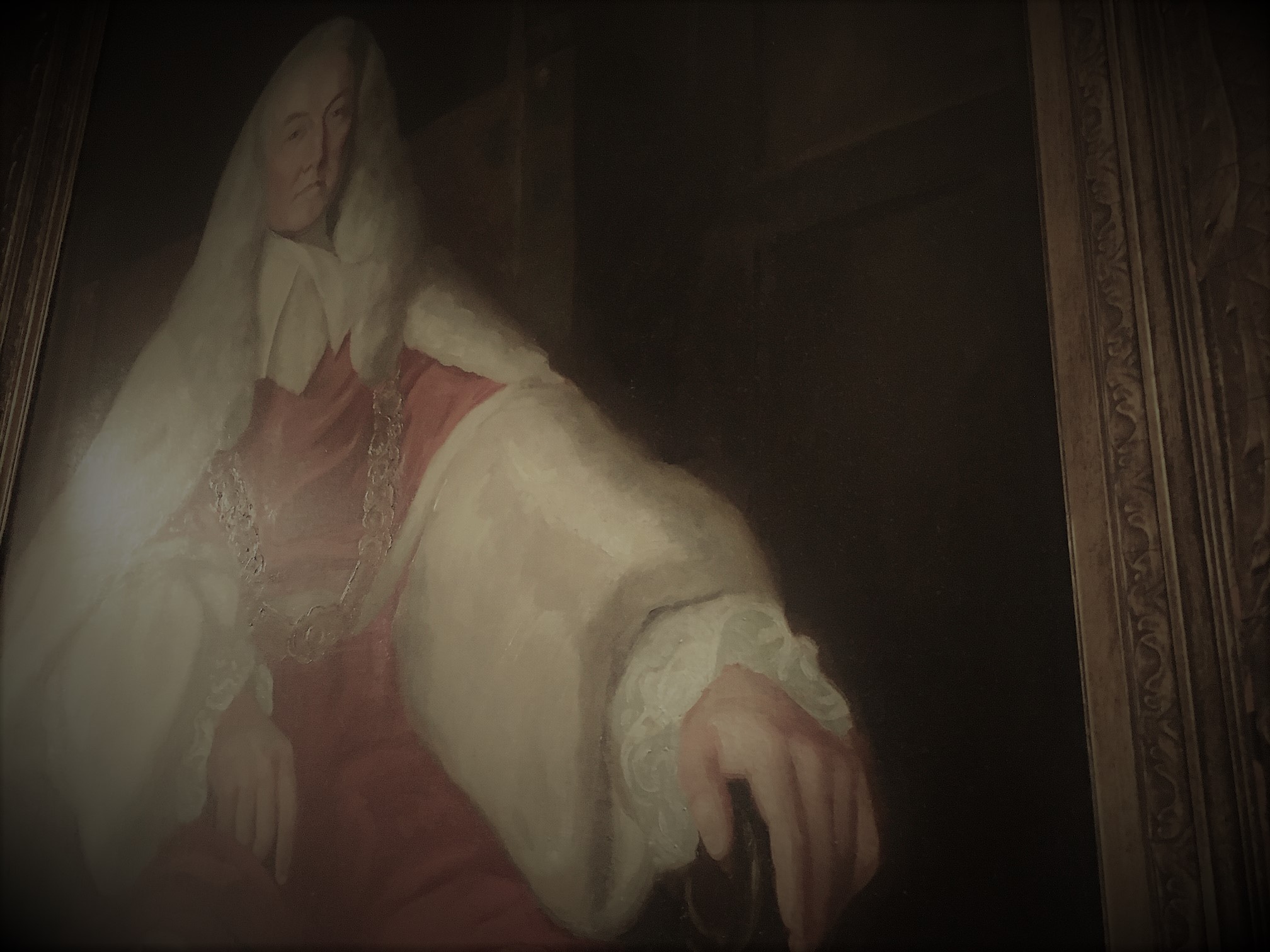 Tuesday, April 21: You know what is frightening? Lord Mansfield. Or at least our life-sized portrait of Lord Mansfield (shown above)—especially when you come around a corner in the dark and empty library and he is just looming there over you. It is a huge portrait and it is hung up on the wall a bit so that Lord Mansfield is a good two feet taller than you. When the library is full I usually just pass right by the portrait and I might think, “That’s a big portrait,” but that’s about it. Today, with no one else here, and the library still dark since I hadn’t yet turned on the lights, it made me stop in my tracks. Fortunately, like my hero Beaker, I’m not one to get flustered easily. I don’t know Lord Mansfield, but I do know that he looks mean in our picture. Or at least he looks stern. And I actually think “stern” is the same thing as “mean,” except that some people think that being “stern” is a leadership quality. Anyways, if I was ever getting my portrait done, first of all, I would choose a different wig. But also, I would hope that my family and friends would say, “Hey. . . Ben. . . maybe a different facial expression? It’s just that you look kind of mean is all.” And I would be thankful that they said that because I’m not one who, two centuries from now, wants to be up on a wall scaring people in an empty library. Though maybe that’s a thing, because it turns out we have quite a few pieces of art that look pretty spooky when the lights are off and the building is empty.

Tuesday, April 21, later that same day. . .: You know what is even more frightening? The Basement. Most of our students think that the law library has three floors: the first floor with the circulation desk and main reading room; the second floor with its reference area, technical services department, stacks and study tables; and the third floor, with a few more books, study carrels and special collections department. We actually have four. Few people have reason to visit our basement, even though it is an open floor. It’s small, there are no study tables and it has only a small collection of books, though it includes our famous Oceans Collection. It’s the only place in our library where we have compact shelving—movable shelves that save space by opening and closing with large cranks that allow you to move an entire range of shelves by yourself. Compact shelving is pretty cool because one person can actually move hundreds of pounds of books at once as you open up one range or another to find the book you need. It also has a sinister side. When we were having it installed, I took one look at it, and asked the group “Wait a minute, what is to prevent an evil villain from cranking the shelves closed while you’re all the way at the other end trying to get a book, trapping you in the shelves at best or crushing you to death at worst?” No one had a good answer. The Basement is scary on a regular day when there are plenty of people around to rescue you. Today the library was empty, and I had to retrieve a book for a patron about a fishing community in Nova Scotia, which, of course, was in our Oceans Collection in The Basement.

I took the elevator down, knowing that I would absolutely faint if the doors opened and there was anyone standing there. I tried to remember my training from years ago as part of the Scooby Gang (one of the Library staff’s yearly Halloween costume themes). “Be brave like Daphne. Daphne wouldn’t be scared. Daphne is not afraid.” Thankfully, when the doors opened, I was greeted only by an empty hallway. I scooted back to the Oceans Collection, cranked open the shelves, dashed down to our three copies of OCEANS 35.2 CAN .A8812, grabbed Copy 1, and hightailed it back to the elevator and up to the safety of my office on the second floor. Whew! Time for some Scooby Snacks, or whatever it was that Scoob and Shaggy used to smooth themselves out after high anxiety. I can’t remember.

Wednesday, April 22: I emailed the library director to ask if we could replace the portrait of Lord Mansfield with a portrait of me, just so it’s less scary. I haven’t heard back. I’m picking out my outfit.