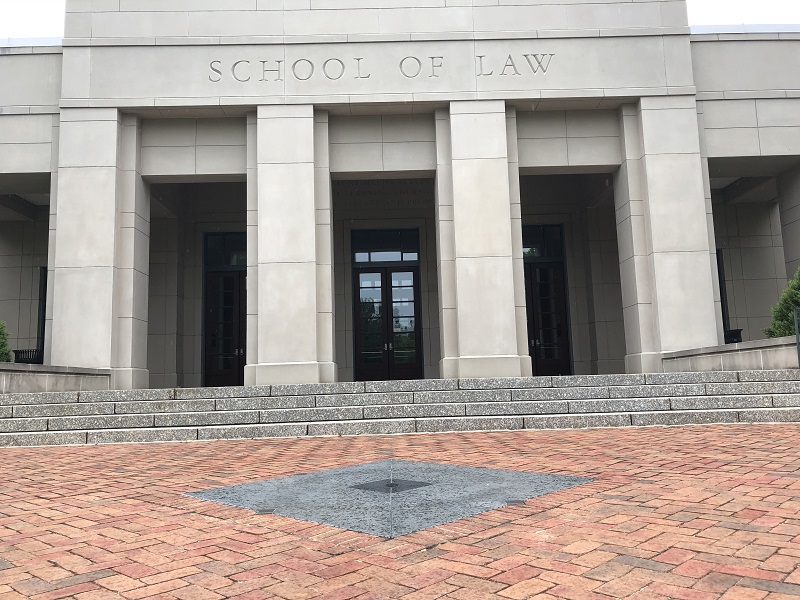 Tuesday, May 19: The steps in the picture above are where I smacked our former law library director in the nose. It was an accident. Taylor (the director at the time), my colleagues Micheal and Cathy, and I were on the law school front entrance steps preparing for our American Association of Law Libraries annual meeting presentation on Leadership Styles for Conflict Resolution. We were, of course, dressed as the Knights of the Round Table, as whenever Micheal, Cathy, Taylor and I did a presentation at the big annual professional conference, we always did it in costume. Cathy was Lancelot the Brave, Taylor was Galahad the Pure, Micheal was Robin the Not-So-Brave-As-Lancelot, and I was King Arthur (not sure why). Because we were cutting edge, we decided to do a videotaped opening for our live presentation. The plan was to gallop up to the steps of the law school using coconuts to mimic the sounds of our horses’ hooves—Monty Python style—and then gallop into the law school and down the main hallway to the library entrance. It would create a seamless transition to our entrance to the conference hall in Portland, Oregon later that year where we would again gallop in, clomping our coconuts, to begin our presentation. On the steps of the law school, we stood as a group to exclaim, while throwing out our arms, that we were “On a Quest for the Holy Grail of Conflict Resolution!” I apparently threw my arms out with too much gusto and caught Taylor right on the nose. I felt terrible when I saw the video afterwards, which we did not use for the presentation, as it showed Taylor doubling over in pain. Taylor has always been a pretty tough person, though. She would often tell of her childhood in Bumpass, Virginia, where it sounded like they did not have a lot other than a competitive spirit and love. She laughed off the whole nose thing, and I kept my job at the law library, for which I am grateful.

Right now, I get down some days. Working from home mostly, or going into a completely empty library once a week, I realize how much I treasure the human contact that is part of being a librarian. Without being able to see and talk with people in person—students, colleagues, patrons—it feels sometimes like all of the work is there, but none of the joy. There are days where I feel like we are stuck in something endless and unchanging. Not much good news in the world. When Taylor was the director, before she retired, we would sometimes have rough days as well. Who knows what they were: the library skylights leaking, construction projects getting overly messy, issues with librarians’ faculty status—something. I would sometimes be sitting out at the reference desk at the end of those days and Taylor would walk by on her way to head home. She would say to me, “Ben,”—in her rural Virginia accent, she pronounced my three-letter name as if it had nine letters and two syllables—“Ben, I am going home and I am going to have a cocktail. And tomorrow? Tomorrow is going to be a brand new day.” And she would smile and walk out, usually in something quite stylish. And the thing about Taylor was, that at that moment, even after however rough the day had been, I believed her.

Thursday, May 21: It’s been cloudy and cold all week here. I think somebody said maybe it’s the outskirts of Tropical Storm Arthur. I took these two pictures back on Tuesday, my day to be in the library. We’re lucky in our library that we have a lot of windows. Most of the time, with the indoor lights blazing all day and the library full and busy, you don’t always notice how much of an effect the outdoor light has on the library atmosphere. On a day like Tuesday, with no-one around, the indoor lights off, and not much sun outside, it feels particularly dark and lonely.