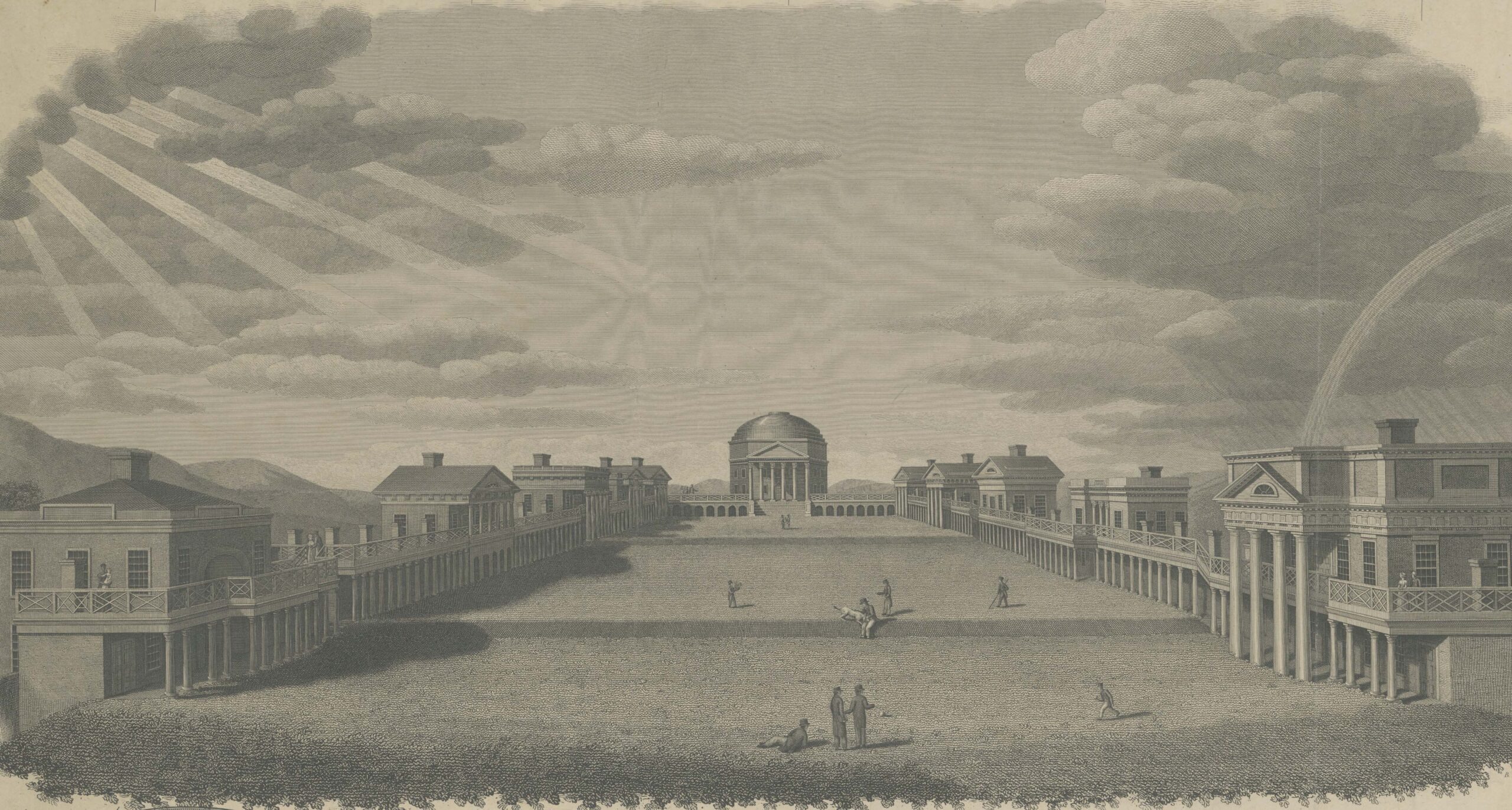 To mark the launch of Slavery & the University of Virginia School of Law, a digital initiative exploring the law school’s historical connections to slavery, we offer the following post that recounts interactions between UVA Law faculty in their role as faculty chairmen with enslaved workers on Grounds. At the University of Virginia, precious little exists of first-person slave narratives that might tell us more about the enslaved community here and how they shaped, experienced, and felt about their lives. Even so, the accounts available from the faculty chairmen’s recordings can offer important instances of enslaved individuals’ ingenuity, bravery, and self-determination. We invite patrons to explore related content at slavery.law.virginia.edu.

A ‘Firm and Inflexible Execution of the Laws’: Policing Students and Enslaved Workers

Two law professors served as faculty chairman during the antebellum period: John Tayloe Lomax (1827-1828, 1830) and John A.G. Davis (1835-1837, 1839-1840).[3] Adjudicating offenses occurring on Grounds—everything from tardiness to outright violence—produced telling interactions between these professors and enslaved workers whose lives overlapped with faculty, students, hotelkeepers, and others. A faculty chairman’s approach to policing on-Grounds offenses effectively relied as much on his knowledge of the rules laid out in the enactments as it did his own personal judgement of how enslaved workers and students should conduct themselves. Collectively, the incidents adjudicated by the faculty chairmen reveal that the presence of enslaved laborers on Grounds shaped and sometimes challenged how faculty chairmen enforced order.

Defining Order Amidst Resistance and Rebellion

While many of the disciplinary guidelines laid out in the enactments involved students and the authority of professors to police and reprimand them when necessary, the enactments applied to all occupants of the University precincts.[4]

The words “slave” or “servant” are never mentioned specifically in the enactments, but enslaved people were regular participants in the chairman’s adjudication duties. Scattered throughout the chairman’s journals are references to acts of resistance and rebellion by enslaved workers on Grounds. Entries also provide at least some sense of the lives of enslaved laborers, including the work they performed; the recreational activities they participated in; the duties they carried out on University property; and, often, illustrations of the abuse and mistreatment they experienced at the hands of University citizens.

Albert was one such enslaved individual who appeared in the 1830-1831 faculty chairman minutes when law professor John Tayloe Lomax served in that position. Albert labored under the employ of Mrs. Sarah Carter Gray, the hotelkeeper for Hotel E in the Academical Village. According to Lomax’s writings, an unidentified enslaved laborer accused Albert of cheating him in a game of cards. It was the unnamed enslaved laborer who appealed to Lomax directly and informed him that the money he had been cheated of belonged to his enslaver, Fendall Carr (the reasons for him having this money remain unknown). Lomax noted that the enslaved laborer was not permitted to appeal to the faculty chairman and therefore “did not deserve, an interference.” Yet, Lomax responded to his request out of a desire to know if gambling was a common occurrence. University enactments in this period banned cards and games of chance from the University precincts.[5]  Lomax issued an inquiry, but the only evidence that surfaced was a lone playing card in Albert’s room. Albert denied the accusation and another enslaved laborer came to his defense, further weakening Lomax’s investigation.[6]

In Albert’s case, Lomax was trying to enforce a particular kind of order, one that reflected his views of the law and allowed him to exercise authority over enslaved people. While making note that the enslaved had no legal right to appeal to him, the circumstances prompted Lomax to accept the request and investigate it out of a desire to prevent riotous activity. Ultimately, Lomax had to determine whether or not students were involved in this gambling ring or if the participation of enslaved persons in a prohibited activity affected student life in some way. Thus, enslaved laborers helped define order on Grounds as well as how far the authority of the faculty chairman could extend. Everyone participated in the adjudication of the offense—even those without legal rights. Albert had the final say by making sure the charge in this instance held no weight in the end, although he was later caught gambling once again and that time the incident was turned over to the proctor.[7]

Drawing Upon the Laws of Slavery and Pro-slavery Ideology

Laws of slavery were a part of the legal theories and philosophies law professors taught in the classroom. Student notebooks reveal that such lectures tended to focus on property, debt, and the circumstances under which an enslaved person might be inherited or seized for debt liability. Nonetheless, questions of the morality of enslavement as well as slave discipline were incorporated into these lessons given the curriculum’s heavy emphasis on legal theory, particularly the theories of William Blackstone. In an 1839 lecture, John A.G. Davis agreed with Blackstone that slavery could not be reconciled with natural law. He believed the greater danger, however, would be to free enslaved people. Maintaining order, he argued, entailed keeping Black persons enslaved but approaching them with a level of humanity:

“All that our circumstances have, hitherto permitted, we have done, as we have made that relation as just and mild as is compatible with the public safety, and with the existence and preservation of that kind of prosperity, and doubt now that these people, are more comfortable and happy than the lower classes of people, in any other country.”[8]

While law professors largely operated within the abstract in the classroom, their position as faculty chairmen provided forums for the real-world application of broader philosophical ideas and pro-slavery ideology. In one of his journal entries dated December 9, 1835, Davis mentions being summoned by Mrs. Carter Gray of Hotel E regarding an incident in which a student boarder assaulted an enslaved worker in the hotel. Gray requested Davis’ response to an infraction that had occurred at breakfast that morning when one of her boarders, W.W. Harris, struck William, her Black enslaved servant. Gray claimed that Harris had conducted himself with “great impropriety” when William was “impertinent to him.” Davis felt that William had not acted “to such a degree however as to excuse [Harris’] rudeness & violence.” This was no act of humanity on the part of Davis towards an enslaved person, William. Rather, Davis sought to protect a power balance on campus, one that Harris had jeopardized by exercising physical discipline towards an enslaved person. Davis believed that Harris, the student, had disrespected Gray’s position as a hotelkeeper by responding that he would strike her servant “whenever it pleased him.” Even as a student, Harris felt he could behave as master over an enslaved person on Grounds by reprimanding William with violence. Davis presented the matter before the faculty and Harris was suspended for a week. Upon his return, he was ordered to move to another hotel.[9]

The everyday context in which Davis operated as faculty chairman was one in which the lives of enslaved people intertwined with the white and free Black community.[10] The incidents Davis recorded in his journal show enslaved laborers navigating various spaces and relationships on their own terms. Davis responded to a variety of claims, including an act as mundane as enslaved servants providing “expensive suppers” to students.[11]  In another instance, Davis found himself inspecting a basket belonging to an enslaved person who was smuggling rum and whiskey for himself and students.[12] As faculty chairman, Davis was tasked with enforcing the rules and keeping order. The reality of life on Grounds meant that enslaved people were consequential players in the community he policed, and that norms associated with slavery were part of the order he sought to maintain.

Even though the spaces and buildings of the Academical Village were designed to hide the day-to-day work of enslaved people from the academic life of the Lawn, the experiences of the enslaved as described in the faculty chairman journals reveal how intertwined the landscapes of enslavement, education, and student life were on Grounds.  Enslaved servants cleaned students’ quarters, ensured they made it to class on time, prepared food, and performed countless other functions for the University. While enslaved people likely benefitted from illicit acts such as smuggling rum, which students no doubt used to their advantage, they also received more severe consequences when caught.

In disciplinary cases involving the enslaved, Professors Lomax and Davis brought their legal training to bear upon extrajudicial matters at the University. But these faculty chairmen were also active participants in upholding a second, unspoken mandate to maintain the subjugation of enslaved individuals. Thus, order at the University of Virginia often entailed justice that did not contravene the logics of chattel slavery, a dynamic illustrated in the aforementioned cases.

[1] Enactments relating to the Constitution and Government of the University of Virginia: 1827,” Chapter 1, Section 1, Subsection 1, Jefferson’s University … the early life, http://juel.iath.virginia.edu/node/343?doc=/juel_display/enactments/1827/enactments-1827.

[2] “Enactments relating to the Constitution and Government of the University of Virginia: 1831,” Chapter 1, Section 1, Subsection 10, Jefferson’s University … the early life, http://juel.iath.virginia.edu/node/343?doc=/juel_display/enactments/1831/enactments-1831.

[10] Free African Americans worked at the University in both skilled and unskilled positions. A free Black community formed near the University in a neighborhood called Canada. However, both the University and the state of Virginia did not welcome the presence of free African Americans. An 1806 law stipulated that they vacate the state within a year of emancipation. The thriving Canada neighborhood as well as records revealing that the University paid free Black workers is evidence this law was not strictly enforced. Brendan Wolf, “Kitty Foster,” Encyclopedia Virginia, Virginia Humanities, accessed January 22, 2021, https://www.encyclopediavirginia.org/Foster_Kitty_ca_1790-1863#start_entry.

Meggan Cashwell is a postdoctoral research associate in legal history for UVA Law Special Collections. She is spearheading the library’s forthcoming edited history of legal education at the Law School (UVA Press).

Logan Heiman was Communications Specialist in the Office of the Vice Provost for Academic Technology and UVA Law Library Special Collections. He previously served as project cataloger for the Stuart Cary Welch Islamic and South Asian Photograph Collection at the Harvard Fine Arts Library.

View all posts by Meggan Cashwell and Logan Heiman.