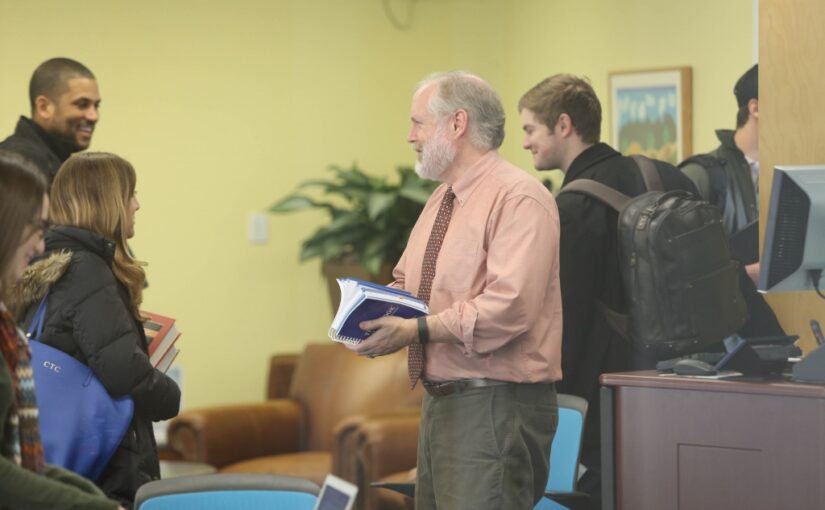 Kent Olson will retire in August after more than 35 years at the Law School, and we’re taking the opportunity to reflect on his many contributions to our community. But where to begin? Since Kent dedicated his career to research services, we decided it would be fitting to do some research of our own—about Kent’s scholarly publications, his appearances in student publications, and all the ways in which UVA Law  faculty have acknowledged him in their publications. Here’s what we found.

As you may already know, Kent is a star of the legal research field. He has twice won the American Association of Law Libraries’ Joseph L. Andrews Bibliographic Award for making “a significant contribution to legal bibliographical literature”—first in 2000 for Legal Information: How to Find It, How to Use It, and again in 2010 for Principles of Legal Research, which is now in its third edition.[i] Kent worked on ten editions of Legal Research in a Nutshell, starting in 1992 with co-author (and Nutshell creator) Morris Cohen and continuing through the just-published fourteenth edition. He has published various articles and book reviews over the years, including one that led Bob Berring, another eminent legal bibliographer, to call Kent “the author of my all time favorite book review.” (Berring was referring to Kent’s review of a volume of the federal reporter, “Book Review of 750 F.2d.”)

But Kent’s professional service extends well beyond his publications. He launched the Law School’s Advanced Legal Research course in 1993, and as evidenced in the annals of the Virginia Law Weekly, he has been liked and admired by class after class of law students. Kent racked up an impressive streak of VLW “thumbs ups” ratings from 2002 to 2004, beginning on April 26, 2002, when the editors recounted how, “[o]n the last day of Advanced Legal Research, he went through the entire class (100 plus), row by row, and named every single person without using notes or a facebook.” VLW later recognized Kent “for showing Martin Luther King’s ‘I Have a Dream’ speech in Advanced Legal Research” (January 23, 2004) and giving gifts to the students with the highest grades in Advanced Legal Research (April 23, 2004).

In addition to Kent’s human touch as an instructor, VLR praised Kent’s fearless stewardship of the library space:

[I]n the library, brave Librarian Kent Olson responded to the distress call of a woman who noticed that a garbage can in the law library was rustling. Olson stuck his arm in the can, retrieved a real live bat, and disposed of it appropriately.

And students appreciated Kent’s sense of fun. A 1994 issue of VLW presented this vignette of Kent playing softball:

During a recent game at Copeley, Kent Olson (the captain of the Law Library team) was seen behaving remarkably like someone who actually enjoys the game. He took a full-fledged slide into home plate, ensuring jeans with orange clay stains for years to come, and was heard cheering his teammates, including Anne H., the Westlaw rep., with slogans like: “Come on, Annie! Give ’em a password!”

Kent’s accomplishments as a softball teammate, an author, and an instructor would be enough to constitute an exemplary career–but there’s more. Kent has provided decades of top-tier service the UVA Law faculty. His keen grasp of scholars’ research needs was on display in a 1999 issue of VLW:

If vodka is made from potatoes, why don’t the Irish make vodka? . . . “This is the kind of question that professors come up with when they go to lunch together,” explained Kent Olson, Director of Reference Research and Instruction.

Wry comments aside, Kent’s approach to faculty research has been marked by a commitment to service and remarkable skill as a researcher. Here’s how he described his philosophy:

“We don’t want [faculty members] to ever have to enter the library; we want them to be able to sit at their desks and wish for things.”

And what have those faculty members who “wished for things” said about Kent? They’ve praised his “superb,” “generous,” and “exceptional” research assistance. They’ve told readers how Kent “helped track down an elusive quotation,” “bent rules and beat bushes to find what I needed,” and “answer[ed] even the [questions] I didn’t know enough to think of.” And they’ve expressed the extent to which they “utterly depend” on his “skill and patience.”

The Law Library staff will miss Kent’s skill and patience, not to mention his sense of humor, his Halloween costumes, and his fantastic blueberry muffins. But after more than 35 years of scholarship, instruction, research assistance, and mentoring, we know that Kent has more than earned his retirement. We wish him all the best in his coming adventures.

[i] Co-authored with Aaron Kirschenfeld and Ingrid Mattson.

View all posts by Kate Boudouris.