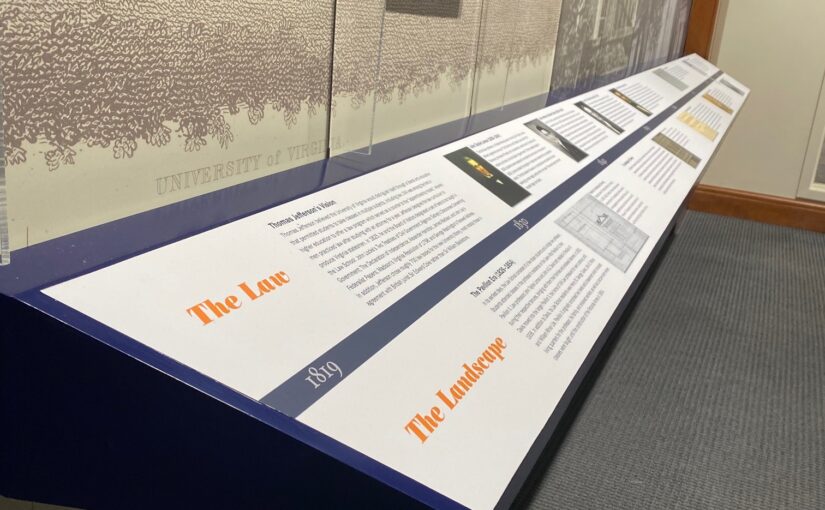 The Special Collections team is excited to announce the completed renovation of the Law Library’s Entryway Exhibit, which originally premiered in March 2014. The initial iteration as well as the current exhibit were designed by Gropen.

Since the exhibit’s opening, Special Collections has expanded its rare materials, research goals, and understanding of the Law School’s complex history, particularly as it relates to issues of slavery, discrimination, and diversity. The result is a new timeline (or “reader rail”), additional hanging images mounted on the wall, and a redesigned introduction panel which matches the University’s updated brand.

The exhibit is divided between the themes “The Landscape” and “The Law,” inviting patrons to consider significant moments in the Law School’s past within the framework of its physical spaces. Classes were originally taught in the law professor’s residence on the Lawn. The school then moved several times before relocating to North Grounds in 1974. In addition, the exhibit covers Virginia Law’s evolving curriculum and major shifts in student life and culture.

Related Special Collections projects informed the bulk of the exhibit’s revisions, including ongoing research into how professors taught the laws of slavery during the antebellum period, explorations into the historical landscape of North Grounds, and the Law School curricular history book project headed by Postdoctoral Fellow Meggan Cashwell.

While the entryway guides the Law School’s students, faculty, and staff into the library and its resources, we encourage patrons to pause and explore the updated exhibit, and with it, UVA Law’s 200-year history.