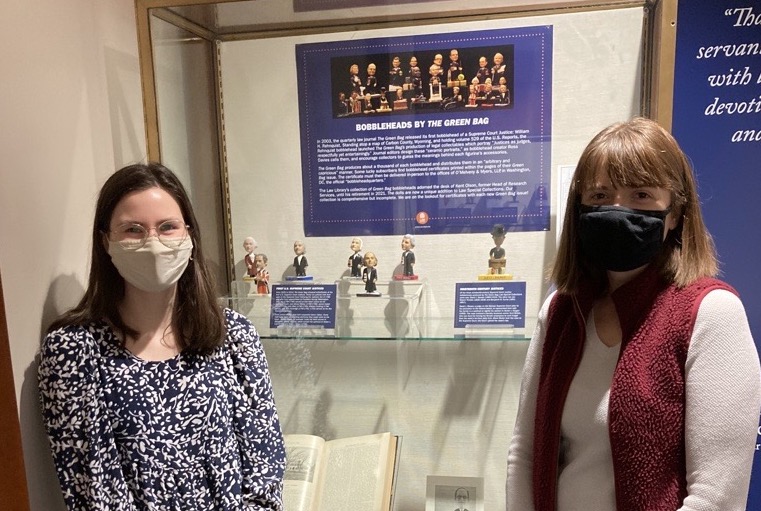 On December 6, 2021, UVA Law Special Collections debuted Bobbleheads by The Green Bag. The display, located in the Arthur J. Morris Law Library’s entryway, is a semi-permanent addition to our ongoing exhibitions. The exhibit is curated by Meggan Cashwell and Addie Patrick.

The blog that follows is the second of a two-part series. If you are curious about the history of The Green Bag and the whimsical nature of acquiring their Supreme Court bobbleheads, we encourage you to check out our initial post here. What follows is a synopsis of our delightful conversation with Green Bag editor-in-chief and bobblehead creator Ross Davies.

My curatorial process with Addie always begins the same way: with copious notetaking and countless brainstorming sessions. Often the topic and timing of the exhibit is obvious, like our tribute to Ruth Bader Ginsburg upon the Justice’s passing in 2020. At other times, we try to create a concept that is both unique and historical, such as the department’s forthcoming exhibition on UVA Law student doodles (credit Special Collections head Randi Flaherty). The details matter most when curating an exhibit. Every object is carefully selected to represent the narrative and every word of exhibit text is pored over many times. On installation day, we scooch placards a little to the left and right and inch materials this way and that until everything is perfect. Our love of detail piqued our interest in The Green Bag’s Supreme Court Justice bobbleheads, each one decorated with intricate features—some obvious to the onlooker, others more subtle and nuanced. It is Ross Davies’ deep appreciation for detail along with American legal culture that inspired him to create The Green Bag’s Supreme Court bobbleheads as the journal’s editor-in-chief.

Addie and I first became acquainted with the bobbleheads when we were curating Remembering Justice Ruth Bader Ginsburg for the Law Library. Kent Olson, who recently retired as Head of Research Services, kept the library’s collection on his desk. We inquired if we could borrow Justice Ginsburg’s bobblehead for the exhibit and feature it with related paraphernalia. After Kent transferred the bobbleheads to Special Collections upon his retirement this past summer, we approached the department heads and library director about putting the figurines on display.

As we began researching, we quickly realized the bobbleheads are not your average ceramic statues. Since The Green Bag released its first bobblehead in 2003, they have become immensely popular in the legal community. The Law Library’s bobbleheads are not the only ones you will come across at the Law School. They adorn the desks of various faculty members as well. It did not take long for Addie and me to feel the enthusiasm around the bobbleheads. We squealed with excitement in the stacks of the library one afternoon when we flipped through the pages of a few past Green Bag issues and came across two bobblehead certificates.

Our quest for bobblehead knowledge led us back to Kent who referred us to Law professor Thomas Nachbar. He kindly chatted with us regarding his role as a contributing editor (see part I), but he deferred to Ross Davies for all things bobblehead related. Tom introduced us to Ross via email and, a few days before winter break, we sat down with him over Zoom.

Our desire to bring some reprieve to exam-weary students via the bobbleheads is exactly what Ross intended when he came up with the idea nearly twenty years ago: “It is a part of being human to have a sense of humor, to smile, to have a little bit of fun.” At a time when bobbleheads were all the rage in sports, Ross decided The Green Bag should create a bobblehead in the likeness of then Chief Justice William H. Rehnquist. The bobblehead’s features would nod (pun intended) to some of the Chief Justice’s most noteworthy opinions.

First, Ross had to determine who would make a bobblehead that would find its way to the Chief Justice himself. After purchasing multiple bobbleheads and exploring their different qualities, Ross determined that Alexander Global Promotions (AGP) was the obvious choice. According to their site, AGP is the number one bobblehead producer in the world. Ross soon found himself on the phone with Malcolm Alexander, founder of the company, who shared his enthusiasm for the concept. A collaboration blossomed that remains at the center of Green Bag bobblehead production today.

Much like our curatorial methods, Ross has his own involved and detailed process for creating the next bobblehead. Once he and other Green Bag editors select a Justice, Ross begins reading that Justice’s opinions. The facts of the cases, the analogies Justices make in their opinions, and the interesting words they use become the basis for bobblehead annotations. Ross then writes page after page of specs and sends them off to AGP. From there, Ross and AGP go back and forth on drafts until the bobblehead is just right. Ross wanted Justice John Paul Stevens to stand on a Sony Betamax as a reference to Sony v. Universal (1984). Malcolm Alexander suggested that Ross purchase that particular model and send it to AGP so that they could design the base of the bobblehead as an exact replica. Ross explained that the Sony Betamax he purchased sat on a table as a visual reference for AGP employees during production.

The bobbleheads are hand painted, allowing AGP to provide the level of specificity the Green Bag desires for each figurine. The forthcoming Justice Sonia Sotomayor bobblehead is standing on a plate (a reference to her opinion in a patent case), with a slice of pie and a loaf of bread at her feet (references to her use of analogies involving pies, loaves, and slices). AGP made each item look as close to the actual baked good as possible. “Do you know how hard it is to paint a piece of ceramic to look like a piece of apple pie?” Ross exclaimed. “We challenge their art; we challenge their ability to make cool things.” Justice Sotomayor is wearing a baseball mitt (a reference to a baseball analogy in yet another opinion), and not just any mitt. It is modeled from the mitt of Jorge Posada, catcher for the New York Yankees. Justice Sotomayor is a longtime Yankees fan and sits in the Judge’s Chambers section at Yankee Stadium.

As for choosing the next Justice to feature, it is largely “arbitrary and capricious” in true Green Bag fashion. Unsurprisingly, Ross says he receives many suggestions. The Green Bag does have one “rule” for the present Court: A Justice has to serve for a minimum of ten years before getting a bobblehead. Ross admits that there is a sense of finality to summing up a current Justice’s career. In response, The Green Bag has started making “pocket part” bobbleheads—mini versions of the originals that feature later opinions. The journal has already produced two pocket versions for Justice William H. Rehnquist.

The Green Bag’s decision to make non-Justice bobbleheads in recent years has allowed them to include other lawyers who have made a profound impact on the profession. When we asked Ross why he selected young Thurgood Marshall, Belva Ann Lockwood, and William T. Coleman, he simply responded, “They are lawyers whose contributions merit memorialization in a bobblehead.” Ross’ love of American legal history, which he teaches at George Mason University among other subjects, is evident in every bobblehead he crafts.

At the end of the day, Ross says The Green Bag is simply trying to be nice: “We’re not in this to score points.” The ultimate purpose of the bobbleheads, besides giving a Justice a good-natured laugh, is to spread knowledge about the Supreme Court: “We have a chance to contribute a tiny bit to people understanding the depth and character and trajectory of the Supreme Court. Our challenge is to create and properly orient what we do so it fits the flow of history.”

View all posts by Meggan Cashwell and Addie Patrick.