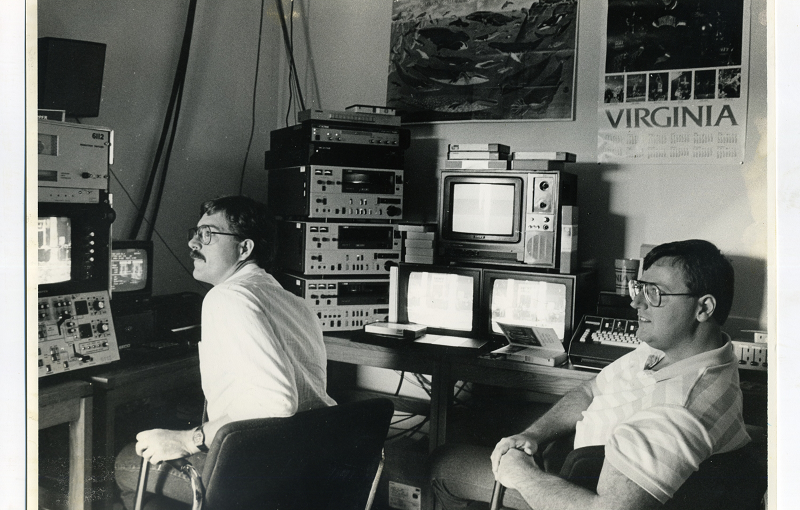 Micheal Klepper retired this summer after over 43 years of exemplifying Hoos Spirit as a law librarian—the longest tenure of any professional librarian in the history of the University of Virginia School of Law. Micheal’s consistent professionalism, enthusiasm, and innovative energy have extended well beyond the doors of the Law School. In addition to being our Media and Communications Librarian, Micheal worked for three decades as the video coordinator for the men’s basketball team, and as a camera and scoreboard operator at the athletic stadiums around Grounds. His days would often begin at five a.m., as he arose to take care of the horses he has always loved. After working all week at the Law Library, he would spend his weekends travelling with the men’s basketball team or operating a camera or scoreboard at one of UVA’s athletic stadiums. Despite this grueling schedule, anyone who knows Micheal knows that he has always exhibited the utmost in class, kindness, and professionalism—always happy to see and help anyone he met.

Throughout his tenure at UVA, Micheal was an innovator. In the early 1980s he pioneered the production of a “coaches show”—producing the first-of-its-kind weekly television show featuring UVA basketball and football coaches Terry Holland and George Welsh, a format that was copied around the country afterwards. He produced a highlight video for Ralph Sampson at the height of Sampson’s college basketball career that was also groundbreaking in its popularity. In the Law Library, Micheal spearheaded the use of microforms while they were cutting edge technology, was central in getting the library to adopt public-use scanning machines, and produced countless videos containing oral histories of the Law School—all while working thousands of hours at the reference desk. He also started the immensely popular Grilled Cheese Night, serving well over 3,000 hot grilled cheese sandwiches to law students during final exams over the years. When Appalachian School of Law opened in the 1990s to serve the coal mining community of southwest Virginia, Micheal rented a U-Haul truck and drove hundreds of books down to the town of Grundy so that Appalachian could start its law library. Micheal even once captured a rattlesnake that had somehow appeared in one of the UVA Law School’s bathrooms. Most importantly, Micheal always made you feel welcome. We will all miss his steady presence and spirit in the library.