UVA Law Empirical Research Librarian Alex Jakubow attended an intriguing one-day symposium titled “The Death Penalty’s Numbered Days?” this month at Northwestern University, which was graciously organized and hosted by the editorial board of the Journal of Criminal Law and Criminology. Jakubow and UVA law professor Brandon Garrett joined a group of legal scholars in situating the modern death penalty in doctrinal, historical, and empirical contexts and debating when and how (if at all) the abolition of the death penalty in the U.S. would occur.

Garrett and Jakubow presented some of their empirical research on the decline of the death penalty in the U.S. since the 1990s. With help from a dedicated team of research assistants, Garrett has assembled a unique dataset covering each of the more than 4,800 death sentences issued in the U.S. between 1991 and 2015. The data reveals that the number of counties sentencing individuals to death has declined precipitously over the course of the previous two-and-a-half decades—from a peak of well over 200 counties in 1994 to just 38 counties last year. The five counties producing the greatest number of death sentences during this period (Los Angeles County, California; Harris County, Texas; Maricopa County, Arizona; Philadelphia County, Pennsylvania; and Riverside County, California) account for nearly 14% of all death sentences, but the number of death sentences is in decline even among these erstwhile bastions of the death penalty. 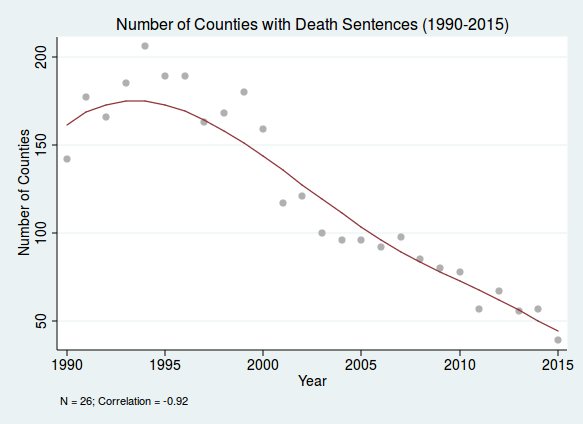 Key finding of the study are that more densely-populated counties and counties with proportionally-greater minority populations engage in more death sentencing, even after controlling for homicide rates, levels of income, and other key variables. The study also finds that sentencing behavior is a highly path-dependent phenomenon—counties that engaged more actively in sentencing individuals to death in the past are more likely to continue doing so in the present. Garrett and Jakubow hope to glean more insights about the driving forces behind these path-dependent processes in future research.

The collection of this sentencing data is a significant accomplishment in its own right, and Garrett and Jakubow intend to make this data publicly available as a resource for scholars, legal practitioners, and advocacy groups to use in their own work very soon.

The results of Garrett and Jakubow’s research will be featured in a forthcoming symposium issue on the death penalty in the Journal of Criminal Law and Criminology sometime in the summer of 2017. This research will also be featured in Professor Garrett’s forthcoming monograph on the death penalty—The Triumph of Mercy: How the Demise of the Death Penalty can Revive Criminal Justice—which is currently under contract with Harvard University Press.

View all posts by Alex Jakubow.