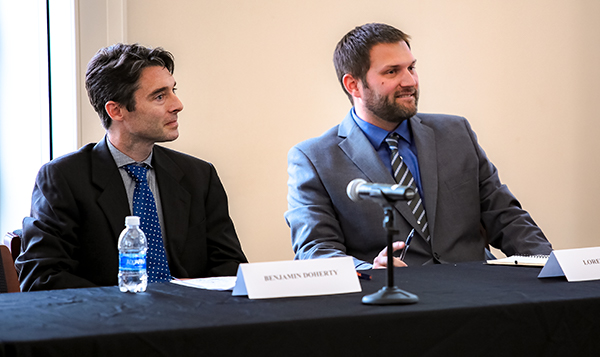 At the “What’s Next for Human Rights Scholarship?” conference on March 31, law librarians Ben Doherty and Loren Moulds presented the Law Library’s new searchable database of preparatory works, or travaux préparatoires,[1] of the United Nations’ core human rights agreements. More than 30 human rights scholars from North America, Europe, Asia, and Oceania participated in the two-day interdisciplinary conference, which was organized by the UVA Working Group in Human Rights Research.

Ben began the presentation by explaining that, until the Law Library undertook the initiative, the travaux were only selectively available in electronic format, as excerpts in published guides to the travaux, and in hardcopy or microfiche at U.N. depository libraries. A Refdesk question from Professor Mila Versteeg led the law librarians to conclude that “it’s not available” was not an answer the Law Library was willing to give. Using the published guides and the United Nations’ UNBISNET database, the Law Library compiled fully-searchable, digital copies of as many of the travaux préparatoires as could be found. The travaux database and other recent digital initiatives, such as the Neil Gorsuch Project, a website that assembles all of Gorsuch’s written opinions and much of his other writings and speeches, are examples of how the Law Library’s content and services are driven by inquiry. Ben advised attendees that, “instead of thinking of research as simply being able to get what is already available,” a scholar can push “research methods forward by thinking about what you need for your scholarship and partnering with your associated library to create those datasets or resources.”

Loren likewise encouraged “scholars not to feel limited in our research plans, particularly when it comes to issues of access to materials, the creation of new types of digital collections, or the adoption of new analytical techniques.” His presentation included an overview of the website and a discussion of the technology used to create it, but he situated his technological discussion within the Law Library’s philosophical approach to scholarly research. Explaining that the Law Library provides ever-expanding expertise in a field that includes scholarly publishing, copyright issues, and the aggregation, management, and preservation of data, Loren stated, “We consider ourselves empathic stewards of knowledge production through collaboration with researchers, technologists, and other librarians working to develop the intellectual infrastructures necessary for new kinds of scholarship and research methods in a digital age.”

After the presentation, Ben and Loren took questions from the conferees. The conclusion of the ensuing discussion was that the travaux database is an example of modern librarianship: a specific inquiry (“What role did smaller countries play in drafting human rights treaties?”) was stymied by a specific problem (the lack of systematic, comprehensive access to the travaux préparatoires), which was resolved by the expertise residing in the Law Library.

[1] The travaux préparatoires are documents that are generated in the drafting and negotiation of a treaty. Under the Vienna Convention on the Law of Treaties, treaty terms are to be interpreted according to their ordinary meaning. However, Article 32 provides that the travaux préparatoires can be used as a supplementary means of interpretation in certain instances.

View all posts by James McKinley.