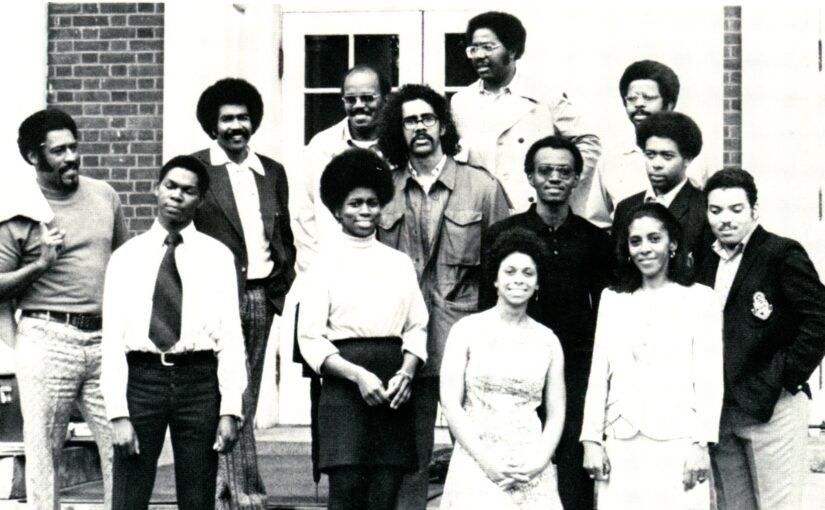 This Black History Month marks the one-year anniversary of 50 Years of BLSA, a collaborative project between Law Special Collections and the Black Law Students Association to mark the fiftieth anniversary of the organization. Read more about the project here. One year after the project, we continue to learn about BLSA through archival research and oral history interviews with alumni/ae. Shortly after the project’s debut, then-BLSA President Allison Burns ’22 heard from Bobby Vassar ’72 about the importance of legal aid work to BALSA’s founding members.

Bobby Vassar ’72, James Ghee ’72, and Gwendolyn Jones Jackson ’72 were among the founding BALSA members who participated in the Law School’s Legal Assistance Society, particularly the Society’s Welfare Rights Project. The Project partnered with the Virginia Welfare Rights Organization to assist Virginia residents who requested welfare assistance, were denied, and then exercised their right to a fair hearing to reverse their verdict. Law students conducted legal investigations and advocated for their welfare candidates before a panel of local welfare officials and a hearing officer appointed by the Virginia State Board of Welfare. Project members represented Virginia residents from Albemarle, Buckingham, Cumberland, Fauquier, and Greene counties, as well as residents from the cities of Charlottesville and Lynchburg. Bobby Vassar recalled that these welfare hearings were the first of their kind in at least one of the counties they represented.

“There were very few Blacks on the [welfare] rolls in these counties because Black women with children were expected to be maids and cooks in White homes or to do other menial labor jobs, so only a few of the most disabled women with children were considered worthy of receiving Aid to Families with Dependent Children (AFDC, now TANF). In several instances, all or some of the local Social Services Board members attended the hearings. Things got testy in some the hearings with one Board Chairman telling Jim Ghee “I think you done said about enough there, boy”, which prompted the State hearing officer to warn him he would clear the room if there were any further such outbursts. We were able to win benefits for almost all of the families we represented as a result of favorable hearing decisions, and that encouraged other eligible Black families to apply and receive benefits.”

Ghee served as the project’s director from 1971-1972, even traveling to Las Vegas, Nevada in February 1971 to assist the National Welfare Rights Organization in reversing Nevada’s cut-off of a portion of the state’s welfare payments.

“We knew there were risks and we were willing to take them.”

“We would use the letters to gain access to the jury rolls to write down the names and then go meet with a pre-arranged group of local Black residents to go over the names to identify whether any of them were Black. The clerk in one county (Nottoway) became suspicious of our group of 4 Blacks and one White after seeing us writing down the names of jurors and actually called the Dean, but was not satisfied with the Dean’s explanation, so closed the office, kicked us out and called the sheriff, town police and state police. We were at the pre-arranged home going over the names we were able to write down so they were not able to find us at first, but once we got back on the highway headed home, one of the officers spotted us, called the others, stopped us and surrounded us with 3 cars of officers who got out with hands on guns to ask us what we were doing. They made us get out of the car and not accepting our “research” story, they took the White student aside and quizzed him on what he was doing with these “colored boys” and how he was making himself look bad and could get in big trouble doing such things. He held to our story and they finally let us go with a warning to us not to return. It was plenty scary, but we knew there were risks and were willing to take them.”

Vassar recalls that as a result of their research, Lowe was able to file a settlement with the six counties involved to desegregate their jury rolls.

Vassar’s recollections and this history now appear on the Service page of our online exhibit. We encourage you to explore 50 Years of BLSA to learn more about Black history at UVA Law.

Randi Flaherty is Head of Special Collections at the Arthur J. Morris Law Library. She is an early American historian with a focus on foreign maritime commerce in the early American republic.

View all posts by Addie Patrick and Randi Flaherty. 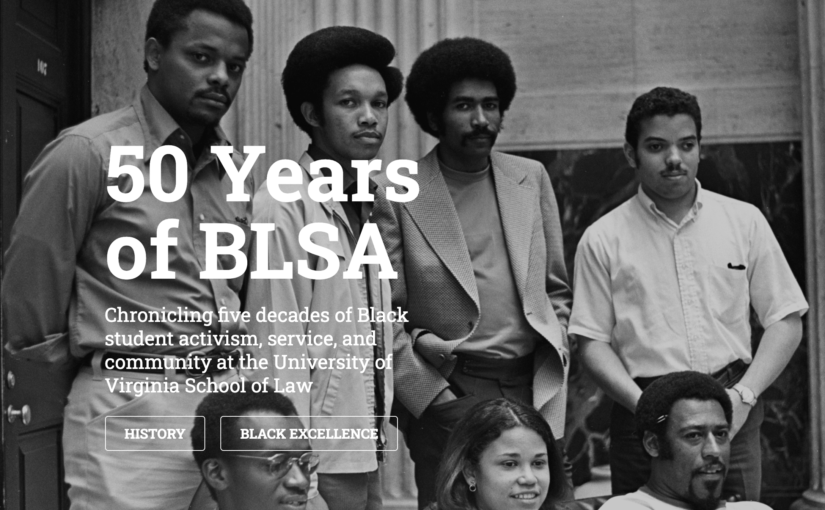 Today marks the official launch of the Law Library’s online exhibit “50 Years of BLSA,” the product of a months-long collaboration between Law Special Collections and the Black Law Students Association at UVA Law. Explore the exhibit here.

As BLSA’s 50th anniversary approached, Law Special Collections and the BLSA executive board agreed to collaborate on a project to exhibit BLSA’s history. We met frequently with Allison Burns ’22 (BLSA President) and Genesis Moore ’23 (BLSA Historian) to determine the content and layout of the site, and to exchange resources. We are thankful for their time and input.

We look forward to future collaborations with other student groups to highlight the many histories and experiences that make up UVA Law. 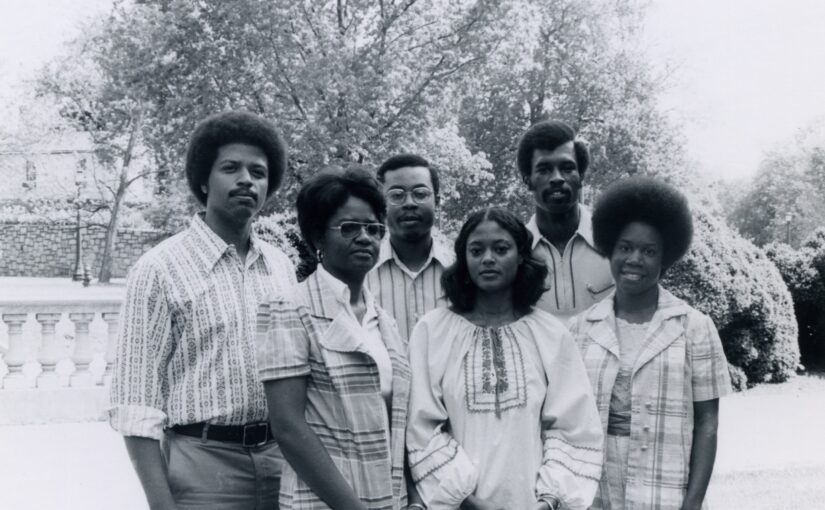 Fifty years ago, on Friday, October 16, 1970, UVA Law’s Black students formed the Black American Law Students Association (BALSA, now BLSA), a chapter of the National Black Law Students Association. BLSA addressed the growing need for a formal body to voice racial and equity concerns, both at UVA Law and within the Charlottesville community, and establish lasting solutions. In 1970, BLSA members advocated for greater recruitment efforts to increase the number of Black students at the Law School and for greater transparency in the faculty hiring process. At the time, there was not a single Black person on the Law faculty.

UVA Law hired its first Black professor, Larry Gibson, in 1972 due in large part to BLSA’s persistent advocacy and strong leadership. To learn more about BLSA’s resilient efforts to increase diversity at UVA Law during its first decade, check out this Spring 2018 article from the UVA Lawyer.

Through the years, BLSA has pushed for change beyond faculty hiring and student recruitment. BLSA has provided legal services for underserved members of the Charlottesville community, staged successful protests, boycotts, and teach-ins, addressed national issues, and collaborated with the Black Student Alliance, UVA’s undergraduate Black student coalition. As an advocate for racial justice at the Law School, BLSA has also served as a social and philanthropic organization that proudly represents the Law School while always holding it accountable.

Today, the UVA Law Library Special Collections team is proud to announce our collaboration with BLSA to produce an online exhibit on the organization’s history, set to be released in February 2021 in conjunction with Black History Month.

We encourage readers to explore BLSA’s social media to learn more about the organization’s history and discover their commemorative efforts and activities. Follow BLSA on Twitter @UVABLSA, find them on Facebook, and check out their website here.

Letter from BLSA to the Editors denouncing implicit racism in editorial published in previous issue, 16 October 1970

Focus on Diversity: Is U.Va. Doing Enough? A Call for Diversification, 13 April 1990