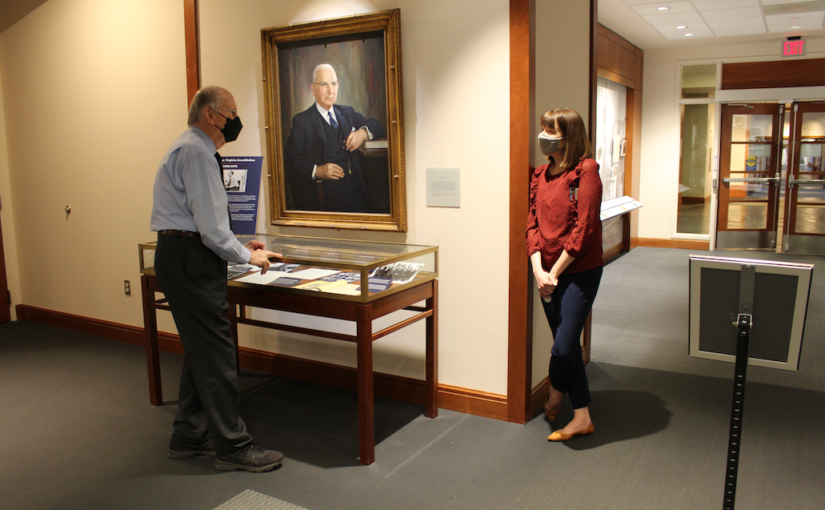 Law Special Collections recently installed Revising the Virginia Constitution, 1968-1971 in the lobby of the Law Library. In honor of the fiftieth anniversary of the 1971 Virginia Constitution, the exhibit provides a retrospective look at Virginia’s Commission on Constitutional Revision through the work of UVA Law professor and constitutional law expert A. E. Dick Howard (’61). Howard served as executive director of the Commission, an appointment he received from Commission chair and former Virginia governor Albertis Harrison Jr. in February 1968. The materials in the exhibit are curated from Howard’s personal papers, which he donated to Law Special Collections in 1981.

In 1968, Law Professor A. E. Dick Howard (’61) began work as executive director of the Virginia Commission on Constitutional Revision, charged with overhauling Virginia’s supreme legal document. In the wake of massive resistance to school integration, Howard and the Commission set out to revise the 1902 Virginia Constitution, which disenfranchised many Black Virginians and explicitly outlawed racial integration in state schools.

Howard undertook the formidable task of administering the work of the Commission, which consisted of ten members and a chair. The commissioners were highly visible legal and political figures, chosen for their stature in the Commonwealth. They included, among others, Supreme Court Justice Lewis Powell Jr., civil rights attorney Oliver Hill, former UVA president and Virginia governor Colgate Darden, and Law School Dean Hardy Dillard (’27).

Following a lengthy study of recent constitutional revisions in other states, Howard proposed a plan of operation and a timetable for the work of the Commission. He divided the Commission into five subcommittees, each of which was headed by a counsel and series of advisors. Counsels were chosen from faculty at Virginia’s four law schools—including UVA Law Professor Peter Low—and from prominent attorneys in private practice, like Jack Spain Jr. The Commission tasked the five subcommittees with recommending revisions to assigned focus areas: Bill of Rights, Franchise, Apportionment, and Education; Taxation and Finance; Legislature and Judiciary; Executive and Corporations; and Local Government.

Here at the Law School, the Virginia Law Weekly covered the stages of the constitutional revision process, with particular emphasis on the involvement of UVA Law professors and students. During the summer of 1968, the Commission hired eighteen law students as research associates to assist the five subcommittees. Twelve of the eighteen associates were from UVA Law. Frances Farmer, UVA Law Librarian and first female Law faculty member, was appointed as Librarian to the Commission at Howard’s request.

After Howard and the Committee submitted their revisions to the General Assembly in 1969, Howard set off on a tour around Virginia to encourage public support for the new constitution.

Four proposals related to amending Virginia’s Constitution were put on the ballot for Virginians to vote upon in November 1970: passage of the main body of the constitution, the potential legalization of lotteries by the Assembly, and two matters pertaining to bond financing. Howard’s speaking engagements created a space for citizens to ask questions and express concerns about the four proposals.

Voters passed the revised constitution with a 72% majority. The other provisions passed by 63% or higher. The new constitution, ratified July 1, 1971, remains in force today and includes a non-discrimination clause as well as guaranteed state and local funding for public education, among other provisions.

On September 20, 2021, Professor Howard—who still teaches constitutional law—stopped by the library to view materials from his collections. Howard assisted in the curatorial process, loaning two items including a testimonial given to him by Governor Ralph Northam on the fiftieth anniversary of ratification (on display) as well as a certificate from members of the Commission (featured here). We asked Professor Howard why he donated the materials to the UVA Law Library. He said he felt strongly that the records should be preserved. Howard also noted that much of the work of constitutional revision was completed here since the Law School’s faculty, students, and librarians were involved in the process from the beginning. Most important, Howard was confident library staff would take great care of the materials: “I had so much respect for the work of this law library that I knew my colleagues here would do a first-class job of collecting and curating and making the collection available.”

We invite patrons to explore Revising the Virginia Constitution, 1968-1971, which will remain on display through December 2021.

This post is indebted to the work of former archivist Marsha Trimble, who processed Howard’s papers in 1981 and wrote the original description, portions of which are featured here and in the exhibit.

Meggan Cashwell is a postdoctoral research associate in legal history for UVA Law Special Collections. She is spearheading the library’s forthcoming edited history of legal education at the Law School (UVA Press).

View all posts by Addie Patrick and Meggan Cashwell.